Bet it’s been a while since you last dipped a toe in the warm waters of Eilat. Minus Tel Aviv’s big city buzz or Jerusalem’s biblical city culture – and an extra plane ride or four-hour drive away – the resort can often seem a bit Red Sea pedestrian to us Brits, who tend to go once then rarely again.

Well, if you haven’t been to the beautiful south in a while, now’s the perfect time. It’s never offered so much, or been within such easy reach.

So what’s changed in Eilat?

For starters, its iconic attractions have really upped their game.

Shark feeding time at the “we’re not a normal” zoo.

The Coral World Underwater Observatory has given guests a rare glimpse beneath the waves for decades. It’s also housed the world’s freakiest fishes and creepiest crawlies such as red-bellied piranha, tarantulas, anacondas and dear old Hannah, the 100-year-old turtle.

But its breathtaking new Shark World exhibit, with 20 species viewed from an underwater tunnel and vast viewing window, is an entirely different kettle of fish.

Every lunchtime children eagerly gaze in wide-eyed wonder as a diver plunges into a 790,000-gallon tank to present these kings of the deep with a giant lunch menu. [The guide tells the children to scream ‘Noooo!’ if the sharks order pizza].

Elsewhere, interactive stations reveal chilling lessons about man’s inhumanity. Some 110 million sharks have been taken from the ocean for their teeth, livers and fins.

An estimated 11,000 are killed every HOUR. The focus is on informing and entertaining, inspiring the next generation to do a better job of conserving and sustaining the planet than their parents. The park was also the first to grow coral in captivity.

It runs school projects for children cultivate their own [When I was at school we just grew cress]. It’s a lifelong process with a metre of coral [underwater ecosystems where fish thrive], taking up to a century to form. 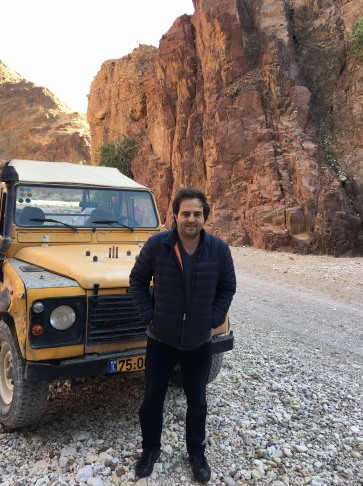 Jeep rides through the Eilat mountains can be a right old pain in the tuccas.

Israel has found more common ground with its Arab neighbours below the water than above. Egyptian and Jordanian scientists pay regular visits to the park to work on joint conservation projects that benefit the entire Middle East.

Our impressive young guide Alex summed this miraculous place up in five understated words: “We’re not a normal zoo.”

Another local favourite worth a second look is the much-loved Dolphin Reef, where visitors have swum with man’s best aquatic friend for decades.

It was the perfect setting for my first watsu water massage – a back-to-the-womb experience that involved a therapist gracefully cradling, stretching and dragging my weightless body hither and tither across the warm water.

Just writing about it makes me drift awa…

OK. Back in the room.

Other attractions worth your time include the impressive Ice Mall with its huge rink and giant igloo, encircled by an array of top-brand shops – the perfect place to take advantage of the 17 percent off tax-free shopping for tourists.

Sweet dreams in the desert?

Eilat’s secret ingredient is getting holidaymakers to abandon their beach towel for an hour or two of adventure. From some of the finest diving sites on the planet to camel rides, nature tours and camping trails deep into the desert mountains, with stunning views of neighbouring Egypt and Jordan.

Israel and Jordan may have signed a peace treaty, but a Red Sea boat ride will soon reveal the heated “Mine’s bigger that yours!” flag war that’s broken out across the ocean. On Jordan’s Aqaba coastline, standing 80-metres wide and 150-metres high, the flag of the King of the Hashemite kingdom flaps proudly in the wind. Israel’s response? A whopping 135-metre wide, 80-metre high Star of David painted on the side of a vast storage container. For the sake of Middle East stability, we’ll call it an honourable draw.

There are some 50 hotels to choose from, standing shoulder-to-shoulder along the chaotic coastline. Most visitors book one of the big four – Herod’s Palace, The Hilton, Royal Beach and The Dan, where I checked in. They all offer deluxe five-star luxury, but none can match The Dan for sumptuous in-house restaurants.

There are five, all overseen by one of Israel’s most celebrated chefs, Ophir Kedem. Meze restaurant Shipudei Habustan, which dishes up some of the finest hummus on the planet, is equally popular with tourists and locals.

It’s also worth splashing out at picturesque Pago Pago, one of Israel’s finest fish restaurants overlooking the marina.

The crane – “the national bird of Israel” according to our expert guide Herzl – is busy working on the new Eilat Ramon Airport [named after Israel’s first astronaut Ilan Ramon]. With the ongoing suspension of international flights to nearby Sharm el-Sheikh over security fears, the airport is gearing up for a busy opening in 2017.

Eilat is a seaside city with a constantly changing landscape. It may not have Tel Aviv’s modernity or Jerusalem’s antiquity, but for a sun-splashed, action-packed, exhilarating adventure holiday, it’s got Eilat to offer!

Like Loading...
‹ OPINION: The greatest moment in TV history and, er, juggling cats
OPINION: Why bashing the bashers is the only option ›