In conversation with the remarkable Lord Dubs, a kindertransport child who has dedicated much of his political life to the plight of refugees. [Labour Party Conference, 28/9/15] 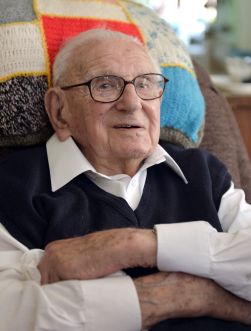 Sir Nicholas Winton, celebrated as “Britain’s Schindler” for saving hundreds of children from the Holocaust, will be immortalised on a Royal Mail stamp after a petition attracted more than 105,000 supporters.

Who’d imagine a BBC1 show famed for reporting on dogs that can say ‘sausages’ and vegetables that look like thingies would broadcast the most moving moment in television history.

But that’s precisely what That’s Life! – The One Show of its day – managed to achieve one Sunday evening back in February 1988.

Between reports on a knobbly knees competition and a piano-playing budgerigar [probably], presenter Esther Rantzen produced a scrapbook belonging to someone in the audience.

It contained details of 669 mostly Jewish children from Nazi-occupied Czechoslovakia, who were given safe passage to Britain just before the war. Most of these youngsters would never see their parents again – the fathers and mothers they waved behind brutally murdered during the Holocaust. But these children escaped and survived. And the man who saved them, Nicholas Winton, was sitting in the front row.

Beside him was Vera Diamond [now Vera Gissing], a 10-year-old girl Nicholas put on a train out of Prague in June 1939. Together again half-a-century later, they tearfully embraced – a moving climax to a memorable reunion.

Now back to the fluff. Juggling cats, anyone?

But it wasn’t over yet. Far from it, as Esther asked: “Is there anyone else in the studio tonight who owes their life to Nicholas Winton? If so, could you stand up…”

After a dramatic pause, as if one were need, HALF the audience – perhaps 50 people – stood up, along with the hairs on the necks of every viewer.

This was an audience that had cheated death. This was an audience who as infants were marked for Auschwitz, Belsen or Theresienstadt. These were the mothers, fathers and grandparents of more than 6,000 people alive today thanks to the unassuming man in the front row, looking slightly embarrassed by all the fuss.

It was an emotional, exceptional moment – followed, when the tears had finally dried, by a showjumping sheep and a goat with a bus pass.

Some 27 years later, on 1 July 2015, I was about to send another edition of Jewish News to the printers when word came that the great man, now Sir Nicholas, had died, aged 106. We spent the night rewriting the newspaper and ran the simple headline: ‘Our Hero’.

In the days that followed we wondered how to make a lasting tribute to his legacy. Weeks later, in partnership with the Holocaust Educational Trust [HET], Jewish News launched a petition, that was signed by 106,000 people, calling on the The Royal Mail to produce a commemorative stamp in his honour.

A decision usually takes two years. The Royal Mail took two months. The stamp will be issued in March.

Following our joint campaign, HET gave me the honour of interviewing two prominent public figures at the Labour and Conservative party conferences, who both owe their lives to Sir Nicky – Labour Party grandee Lord Alf Dubs, who was six when he boarded a train in Prague and Lady Milena Grenfell Baines, who was nine.

They, like painter Frank Auerbach, writer Joe Schlesinger, therapist Dr Ruth Wertheimer and no less than four Nobel Prize winners, were among the 669 children given a second life who went on to enrich the world around them.

If Sir Nicky leaves us with one lesson to pass to future generations, it’s surely the simple, powerful theme of year’s Holocaust Memorial Day, which we commemorate on 27 January. Three words the great man lived his life by: ‘Don’t stand by’.

Like Loading...
‹ OPINION: Back to ’92: This one time, on summer camp…
TRAVEL: Eilat to love in Israel’s beautiful south ›