Each person had their own profound reasons for being at the United Synagogue’s New Cemetery in Bushey on Sunday morning to witness the burial of six unknown Jews murdered in Auschwitz.

For the 50 survivors in attendance, many of whom escorted the tiny coffin containing the bones and ashes of five adults and a child to its final resting place, this was a moment 73 years in the making – a chance to finally, symbolically, grant their mothers and fathers, brothers and sisters the burial they were denied.

Others among more than 1,200 mourners, inside two overflowing prayer halls and outside in the chilly January air, were there to bear witness to a momentous moment in post-Holocaust history – Britain’s first public funeral for Shoah victims.

The remains had been stored for two decades by the Imperial War Museum after being donated by an unnamed individual – believed to be a survivor. After testing confirmed they were adult and child remains, the museum contacted the Chief Rabbi who recommended swift burial.

He asked: “Whose ashes are you? From where have you come? How is it possible to articulate our pain? For the ashes of our families, for the dust of our communities. For the broken tables of our people. The remnants of our youths and elders, our brides and grooms, our sons and daughters, our rabbis and our leaders, our school masters and school mistresses, our parents and infants. After 70 years you have come to rest – perhaps your place can begin to comfort us.” 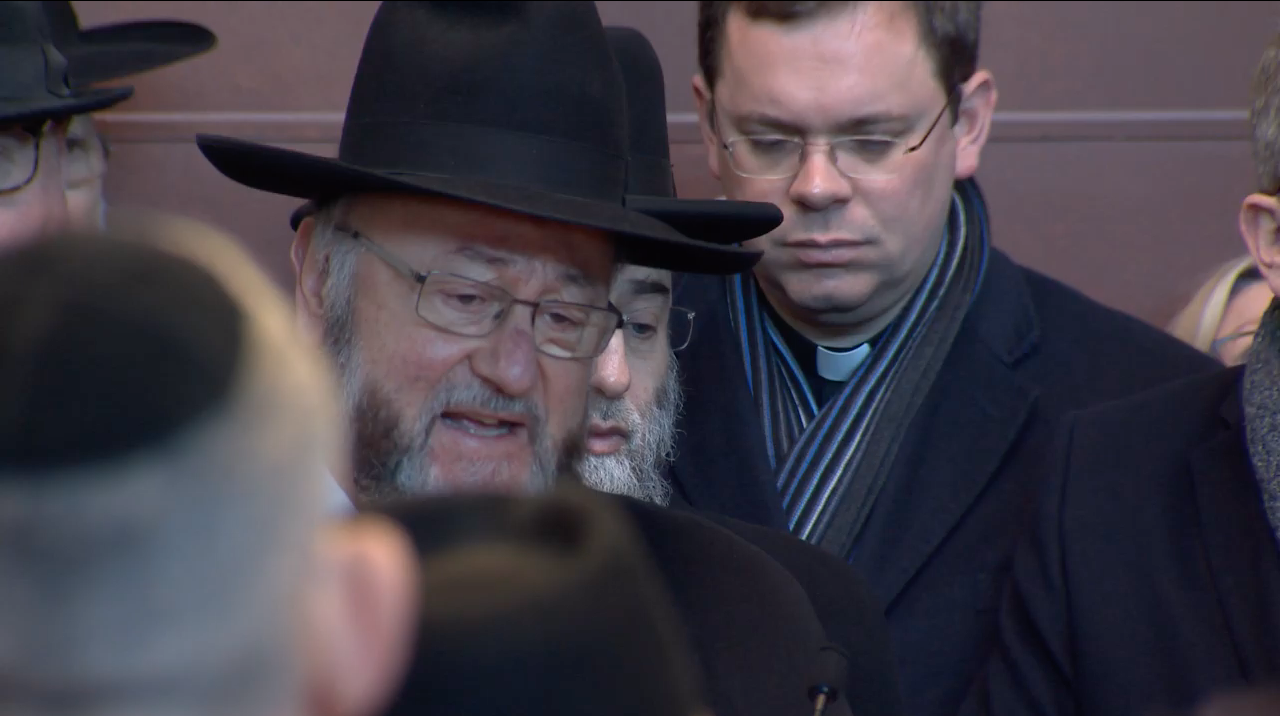 In a deeply poignant address which moved many to tears, Chief Rabbi Ephraim Mirvis spoke personally to the infant among the six, saying: “Your childhood was robbed. You experienced such fear and dread, then the ultimate wickedness saw your life taken. We don’t know who you are, your name, if you were male or female or the details of your family. But we do know you were Jewish. All of us here feel a strong connection to you. 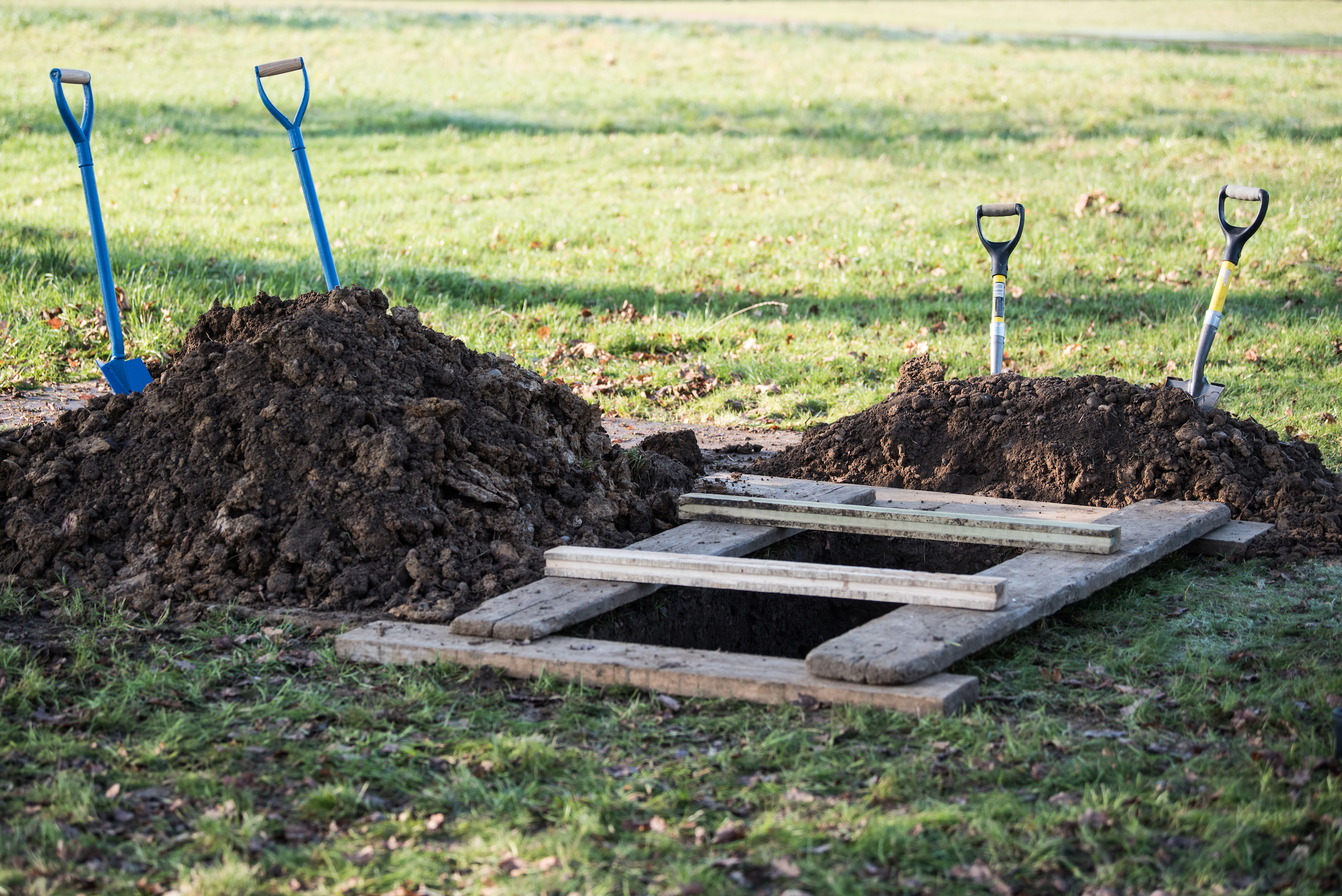 ‘We remember you every day of our lives. You give us constant inspiration. You represent more than one million other children who were murdered. We have been given the privilege to show you dignity here at your funeral.” 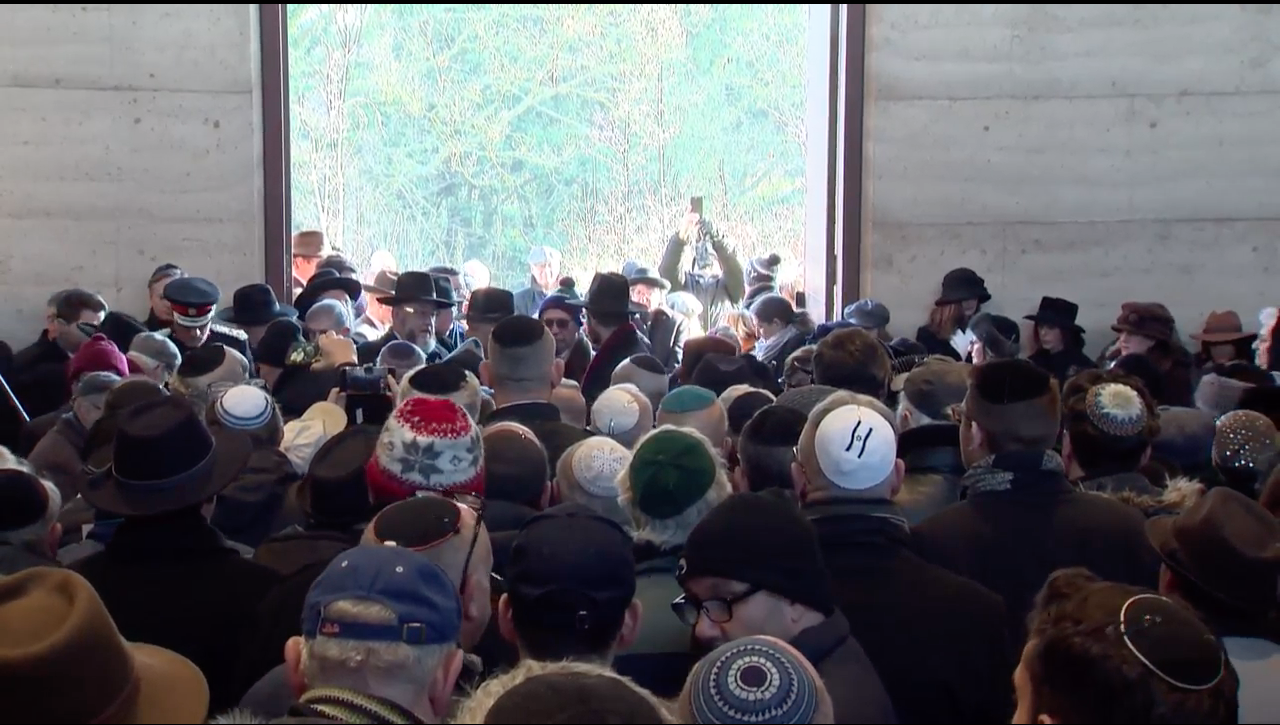 Following the 45-minute service, which was introduced by Doreen Samuels, chair of the United Synagogue Burial Society and movingly conducted by Rabbi Nicky Liss of Highgate Synagogue, mourners followed survivors, including Zigi Shipper, Harry Bibring, Renee Salt and Agnes Grunwald-Spier, to the grave site, where the remains were buried in earth from Israel.

A memorial garden will be built on the site.

Lily Ebert, whose mother and siblings perished at Auschwitz, attended thanks to Jewish Care’s Holocaust Survivors Centre, which arranged for many of the survivors to be there. She said: “For our parents, children, babies, not only did they [the Nazis] take our lives but they didn’t even let us have a burial. Now we have something that is very important to us.”

Looking on as prayers were said, Lord Pickles reflected: “It’s profoundly moving to witness these five adults and child being laid to rest, here in the English countryside. It brings the horrors of what they must have endured so much closer to home. Today is a very important day.”

Communities Minister James Brokenshire said: “We must continue to challenge racism, anti-Semitism and bigotry and where hatred can lead. That’s why this has been such a unique occasion to be able to give some dignity, some respect, some acknowledgement to those six souls who lost their lives in the Holocaust. I hope it will bring people together and underline that message of never again, never forget and that none of us can simply stand by the side and allow this to happen.”

Survivor Agnes Grunwald-Spier, an author and historian born in Budapest in 1944, said she believes her grandfather was killed at Auschwitz but her family has not been able to find the truth. She said: “In a way these people represent all those millions who have no grave and whose families can’t mourn them properly because they don’t know what happened to them.”

Steven Wilson, Chief Executive of the United Synagogue, said: “Like many of the 1,200 attendees of the funeral, I looked at the coffin and wondered whether they might contain the remains of any of my relatives. Our Belgian cousins, Hermann and Albert Schindler were murdered by the Nazis at Auschwitz. Was the Chief Rabbi addressing them in his hesped?

“I took comfort from the response of one of the survivors. She was, understandably, distraught just before the burial. When my colleague spoke to her afterwards to check how she was doing, the survivor was transformed. She said that she had actually found it a positive experience because knowing that some of her friends had had a Jewish funeral took some of the weight she was feeling off her. It was an extraordinary response to an extraordinary day, a Kiddush Hashem and perhaps the ultimate chesed shel emes.

“I’d like to put on record my thanks to more than 50 stewards who gave their time to enable smooth access on site and in the car parks. Many were United Synagogue members but many were not, showing that we are all am yisrael. Thanks too to the Hertfordshire Constabulary and the dedicated CST staff and volunteers for keeping us secure, all the partner organisations who worked with us, the United Synagogue Burial Society and all our staff involved, and to Bushey Meads School for making available their car park free of charge because of the occasion.”

More than 12,000 people have viewed the ceremony on YouTube.

Like Loading...
‹ OPINION: Dive into the deep end of antisemitism
OPINION: Countdown to antisemitism? Not on Rachel Riley’s watch ›