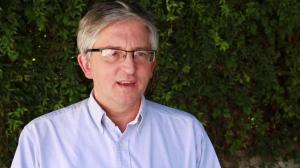 Last year Jewish leaders lodged an unprecedented complaint against the vicar of Christ Church in Virginia Water after he posted online links to articles on extremist anti-Jewish, anti-Israel and Holocaust revisionist websites.

They included a Facebook link to a website called The Ugly Truth, whose charming masthead reads: “Zionism, Jewish extremism and a few other nasty items making our world uninhabitable today.”

He later removed the link but the stubborn delay in doing so led to condemnation by the Bishop of Manchester.

Next came a blog link to a site called Windows into Palestine, which features a link to the depraved Protocols of the Elders of Zion below an image of a Menorah with branches reading “Colonise Terrorise Nationalise Militarise Racialise Intimidate Censure”.

It seemed there were no depths to which the esteemed reverend would not sink in his malicious mission to undermine interfaith relations.

This week, one year after from the initial complaint, Sizer (on the surface at least) appears to have come to his senses.

In a report into the case published on Wednesday, authored by a High Court judge and the Dean of Christ Church Cathedral, Sizer acknowledged he should take greater care before posting links to hate sites.

His belated “regret” (not an apology) is, of course, welcome, but smacks of reluctance more than remorse.

Perhaps now he’ll refrain from promoting the bile and lies lurking in the darkest corners of the web and finally start to quietly do his bit for the betterment of society.

No religious leader can further the cause of faith by firmly taking one side of an issue.

Modern Britain relies on cross-communal dialogue and the bridging  religious divides. Simple respect and decency is the least the Jewish community deserves from its partners in this pursuit.

Like Loading...
‹ Opinion: Tottenham’s Jewish fans let their hearts rule their heads
Opinion: The teacher who helped inspire a generation ›